ORIENTamenti: Reshaping Past Traditions was a project promoted by the Siena Art Institute (SART) in collaboration with the Sienese Museums Foundation, the City of Colle Val d’Elsa and the Islamic Cultural Center of Colle Val D'Elsa in 2014.

The initiative was supported by the Region of Tuscany within the framework of the “Toscana Incontemporanea 2013” program and was sponsored by the Chamber of Commerce and the Province of Siena.

ORIENTamenti was a multi-platform laboratory involving interactions, dialogue and debate in which contemporary art served as a focal point for institutions, communities and artists, with the objective of bringing together different ideas, cultures and sensibilities in a spirit of integration, solidarity and tolerance.

ORIENTamenti consisted of the following components:

SART Fall 2014 Project Fellow, Palestinian artist  Wafa Hourani was in residence at the Siena Art Institute for the autumn researching the town of Colle Val D'Elsa in the province of Siena, specifically the muslim immigrant community's history, sociological context and the complex relationship between the diverse communities in Colle Val D'Elsa and the new Islamic Cultural Center which was recently completed.

A core group of international students; including from Italian Academies of Fine Arts & students from Greek Art Academies were invited to Siena to develop their own artistic voice and were offered the opportunity to delve into themes of identity, belonging and ideas of artistic expression in situations of crisis or sociopolitical/economic difficulty. (Fall 2014 semester students included Giorgos Apostolopoulos, Sreyashi Bhattacharyya, Sofia Bteibet, Anna Fabrizi, Yichong Hu, Alexa Katz, Eleonora Rotolo, & Antonis Tasoulis)  Along with SART faculty, our Fall Project Fellow, Palestinian artist Wafa Hourani worked alongside the students, facilitating the exchange of ideas and mentoring the student artists.

Student artists are also explored the many cultural resources that the territories of Siena and the Val d’Elsa offer, with the aim of furthering their research abilities and making new discoveries that form the basis of their studio projects.

The selected student artists each had their own studio space in a shared facility and participated in a full course program at the Siena Art Institute.

Students pursued independent studio projects responding to the central themes of territories and cultural intersections.  They also worked collaboratively with Wafa Hourani, focusing on an installation entitled "Today is Tomorrow: The Future of Colle," inspired by the community of Colle Val d'Elsa.  The "Today is Tomorrow" installation created models of buildings in Colle Val d'Elsa, re-envisioning how the city might appear in an uncertain future.  Each student created their own building structures which will then became incorporated into the overall cityscape of the installation.  This installation was on view during the November 15 symposium event in Colle Val d'Elsa through January 2015.

This symposium opened on the evening of Friday November 14th with a reception and open studios showcasing student artist works-in-progress at the Siena Art Institute.  On Saturday November 15th, artists, scholars and practitioners of various professions participated in a series of talks and discussions around the theme of Territories hosted in Colle Val d’Elsa, followed by a performance organized by Wafa Hourani as part of the ORIENTamenti project.
The symposium was moderated by Stefano Rabolli Pansera, Italian architect, architectural theorist, urbanist,  curator, and founding director of Beyond Entropy Ltd. 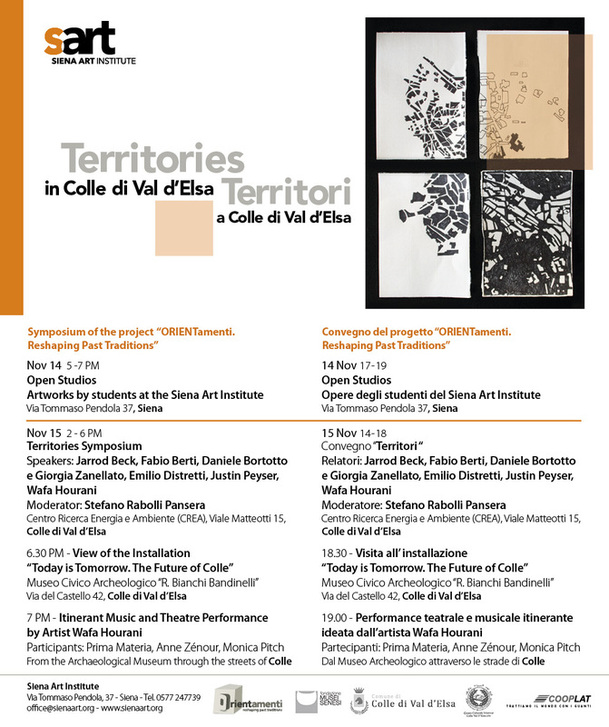 A two-day workshop for museum staff at the Sienese Museums Foundation and for Val D’Elsa school teachers during which student artists were involved in engaging staff in future educational activities linked to the ORIENTamenti project.  This served as the first moment of brainstorming to develop specific projects internal to both humanistic and artistic disciplines. The students of SART were also involved in some of the educational activities related to the Orientamenti project so that at the end of the year 2014 the local students could exhibit their work in conjunction with the exhibition of young artists of SART. 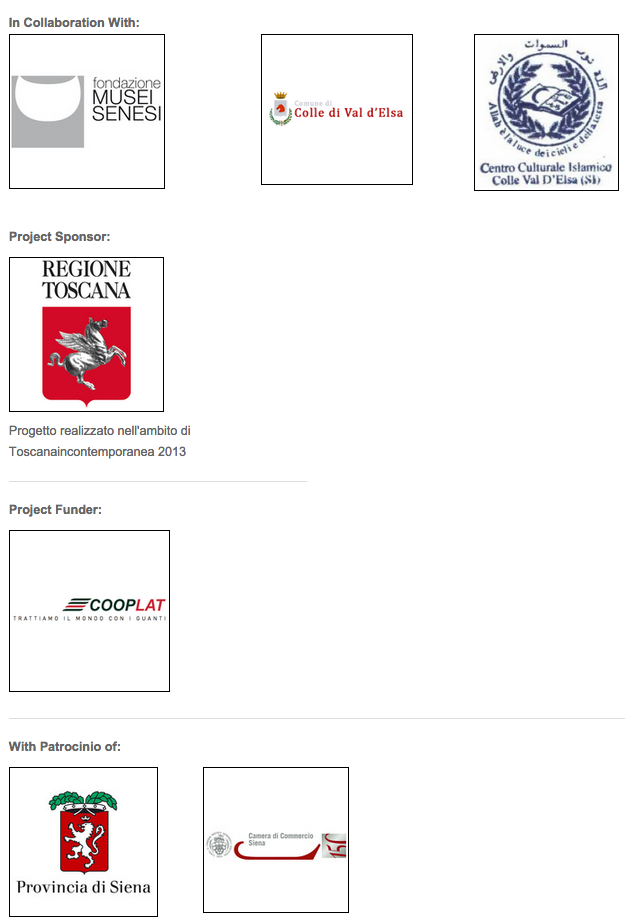