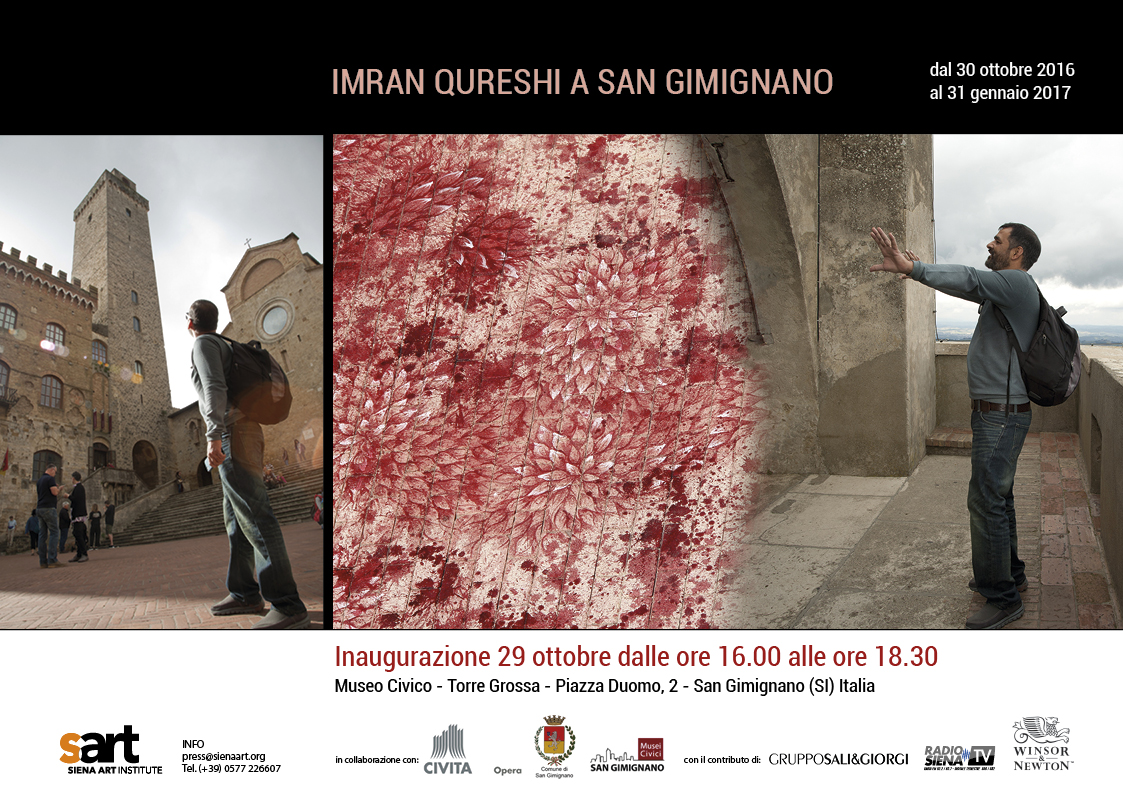 29 October: inauguration of the artworks of Imran Qureshi "THE SEEMING ENDLESS PATH OF MEMORY"

created for the Civic Museum of San Gimignano

Project Fellow at the Siena Art Institute, Pakistani artist Imran Qureshi has produced a unique body of artworks, entitled "THE SEEMING ENDLESS PATH OF MEMORY" comprised of three site-specific creations, designed and produced inside the Torre Grossa in the Civic Museum of San Gimignano (SI), which take the viewer up to the roof of the tower, and will be on view from 29 October until 31 January 2017.

The artworks convey a very strong emotional impact, that experienced by Qureshi, in Italy as a guest of the Siena Art Institute, exploring the confrontation between two lands and two cultures deeply rooted in tradition: Siena and Tuscany and Pakistan.

The exhibition is divided into three sections. At the base of the Torre Grossa are displayed miniature paintings created specifically for this event, made with traditional techniques cultivated by Mughal masters since the 16th century. Going up to the roof of the Torre Grossa, while the gaze moves from one miniature to another, the viewer will experience the crescendo stimulated by an installation that fills the recesses of the inner walls of the Tower: pieces of paper that appear to be bloodied rags but, on closer inspection, they depict images of works by Imran Qureshi.

Then, climbing to the uppermost level, the viewer discovers the largest and most important creation: a pictorial work carried out directly on the roof of the Civic Museum tower of San Gimignano on which petals and leaves emerge from what seems to be a scene of carnage.

Anyone who comes to San Gimignano is struck by these vertical constructions of the towers, buildings so tall, imposing and with a strong symbolic value.” - says the visual artist Imran Qureshi - "The first time I came here, accompanied by the director of the Siena Art Institute, I was struck by how the tower is a symbolic subject, similar to the symbolism of traditional miniatures from Pakistan: the towers are beautiful and glorious, but also they reflect the importance of authority and power and the need for defense and security in the violent world in which they were built. "

The artistic message of Imran Qureshi

“In planning the artistic project with Miriam Grottanelli from the Siena Art Institute - continues Imran Qureshi - I proposed a work that would encourage dialogue between strong and deeply-rooted cultures, placing my project within this tower that is a symbol of medieval culture and traditional in this territory.

It's a clear message but without provocation: after September 11th, contact with each other often remains a stereotyped communication. Instead, I believe that two cultures which are strong and knowledgable can meet each other, rather than clashing with each other.”

Siena, looking to the Eastern world

“In these years, the Siena Art Institute has been looking towards the Eastern world. For this reason we chose to invite Imran Qureshi, as he embodies the type of artist with whom we want to collaborate: internationally renowned and representating of the strong values of a culture rooted in the community, as it is also with the Sienese territory. - explains Miriam Grottanelli, director of SART - With this activity we want to stimulate the public's attention, through art and through and the "outside" point of view of an artist who has came from afar, to discover ourselves, to analyze ourselves, and to find affirmations. In the end, nothing more than to bring out the task of art and artists. "

Who is Imran Qureshi

Imran Qureshi, Pakistani artist, has studied for many years the complex technique of traditional Pakistani miniature painting, developed by Mughal masters from the 16th century. Qureshi, however, interprets this technique with a modern approach.

His recent work often uses pools of paint overlaid with an intricate network of stylized leaves and blossoms, coming from the vocabulary of symbols often used in miniature paintings. He presents the idea of life, beauty and death working together. An undercurrent of hope is strongly felt in the work. At the same time, when you look closely at his work, it becomes poetic as well, showing the possibility of beauty amidst violence.

An artist of international repute, Qureshi has exhibited at the Metropolitan Museum of New York, at the Barbican in London, at the Sharja Foundation in Dubai, the Agakan Museum in Toronto, and numerous other important venues for contemporary art of global significance.

The artist was selected as artist of the year in 2013 by the Deutsche Bank.

The artworks in San Gimignano

The exhibition, installed in the Torre Grossa of the Museo Civico, the historic city hall of San Gimignano, contains three sections:

Niche paper installations: Ascending the staircase, the niches of the historic tower are filled with crumpled paper, which at first appear to be bloodied rags, but upon closer inspection contain images of Imran Qureshi's artworks, with designs of flower petals emerging from blood splatters. These images filling the empty spaces of the tower are a tribute to the human lives upon which such structures are often built.

Miniature paintings: On the penultimate floor five miniature paintings are shown. Using the techniques of traditional Pakistani miniature paintings, these images depict the towers of San Gimignano and the installations Imran Qureshi has created there. The viewer is drawn into these works, recognizing the location in which they are currently standing as the subject of the works.

Site-specific floor painting: The uppermost level of the tower provides a beautiful panoramic view of the territory surrounding San Gimignano. Here there is a change of scale. Imran Qureshi has created a site-specific floor painting, in which flower petals and leaves emerge from what appears to be the bloody carnage of a violent act. The artwork encourages the visitor to reflect upon the violence for which walled cities and towers were built as a defense against, and the battles which raged across what today appears as a peaceful pastoral landscape surrounding San Gimignano. The work also explores what is public and what is hidden: the tower is very much in the open air, but is a hidden space, not visible from the ground level.