Join us at the Siena Art Institute on the evening of Tuesday April 26th for an Open Studio with Brazilian artist Luiza Gottschalk, starting at 7:15 pm.

The event is a chance to speak with the artist and to see projects she has been creating during her month-long stay at the Siena Art Institute.

The Open Studio is free and open to the public.

Note: Luiza Gottschalk's Open Studio event on April 26th will begin at 7:15 pm, following the presentation by Nico Joana Weber earlier in the evening at 6pm at the Siena Art Institute as part of our weekly series of artists' talks "stARTers: assaggi d'arte."  We hope you can join us for both events! 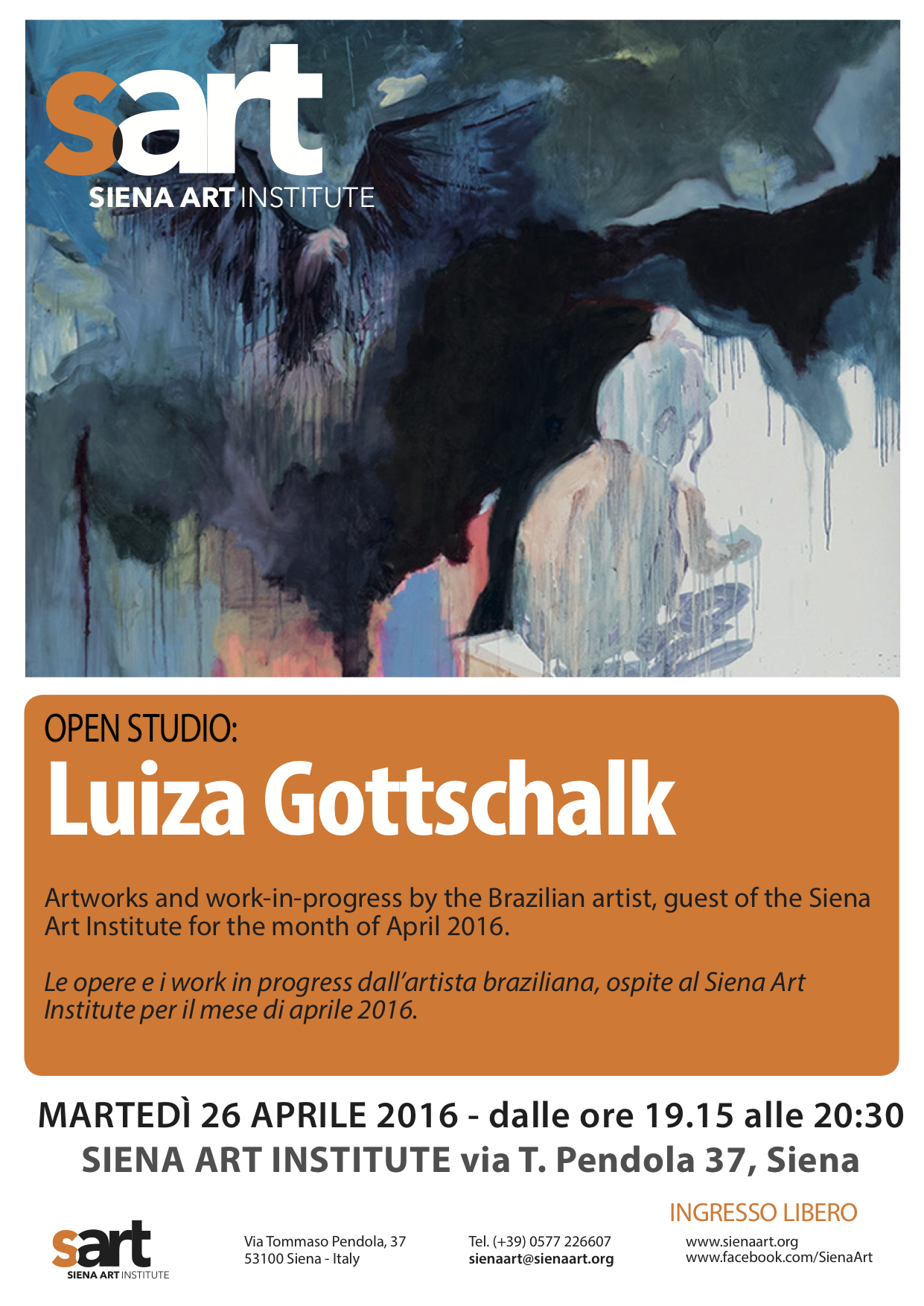 Luiza Gottschalk was born in 1984 in São Paulo, growing in the Minas Gerais countryside, where she stayed until her ninth year. After moving back in São Paulo, she immediately began to perform in theaters, graduating from the Celia Helena Theater School at sixteen and traveling to attend the New York Film Academy in Los Angeles two years later.

She then began to work intensively for television and theater, entering the theater company Os Satyros in 2008 where she still performs today as actress and scenographer.

In 2010, she began to study Visual Arts at the Armando Alvares Penteado Foundation (FAAP), in São Paulo. However, in search of her German roots, she interrupted her academic studies in 2011, to live in Berlin, where she experienced the expressionist legacy that permeates her work. She participated there, of a collective called “Agora”, from the Greek word “public space”, or the Brazilian word “now”, as many artists from this collective were Brazilian.

She then returned to São Paulo and her studies at FAAP, where she won the Plastic Arts Prize in 2013 and 2014, while being mother of a baby child. In 2015, she was selected to participate to the Piracicaba city exhibition (Salão de Piracicaba), with two works.

As a theater performer, Luiza Gottschalk’s paintings are always influenced by her quest of the pictorial translation of corporal sensations. She represents, sometime in paintings objects, as she called her canvased boxes; sometimes on classical canvases, the atmosphere that surrounded her as a child growing in a fish farm, or the physical sensations she experiences as a creator performer and mother. In her works, Luiza uses oil, sometimes pure pigment powder, using a vibrant chromatic palette that reflects the power of her emotions.

Among her influences are Pina Bausch and Rolf Borzik, but as a gut guided artist, Luiza tries to remain free from outside references, allowing her true self to appear.